Isaac William Gomes, more commonly known as Ziggy, was born on the 6th of March to Kate and Pedro. He’s alert and determined with a lovely smile for his grandparents. So he’ll do nicely. Heather and I usually spend a day a week with Kate and him. After her year of maternity leave we’ll have him on our own for a day a week.

Jo returned to work in September. At around the same time 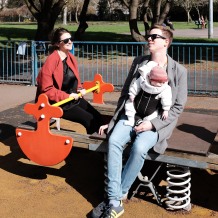 Ben started a new job, working nine days in every fortnight. So, we’re looking after Margot and Wilfred every second Friday. It’s tiring but rewarding all the same. Wilfie is so gentle with his sister. And Margie may be the happiest baby ever.

We’ve had fewer holidays this year with our grandparent duties. We intend to make up for this lack of holidays next year in at least New Zealand, Croatia and the Baltic.

We’ve had a few visitors:

As we’ve been at home more this has unintentionally turned into a year of house renovation. Floors have been sanded, rooms painted, the olive tree has been repotted, Elmo has new couches to snooze upon, ceiling fans have been installed, taps and mattresses replaced. Fences, gates and brickwork have been repaired. Our insulation and draughtproofing has been upgraded. LED lights have been installed in most of the house. A dozen years after we ripped out the old carpet on the stairs and landing we finally got around to having new carpet laid. Perhaps most unnecessarily, we had our front path relaid using the same pattern as the original Victorian 125 year old pattern on our front step – the merger of old and new is fascinating. We have just the dining and living rooms to finish off.

Heather continues reading for Doorstep Library and madly knitting for her grandchildren.

We’ve had our disappointments. Our candidate lost in the May General Election by 45 votes. John had a bout of pneumonia. Heather has a black and blue backside from falling downstairs. As of this writing we both have foul colds. But we’re well. Our kids are well. Their partners and kids are well. And Elmo keeps us fit. So, on balance, we’re more than ok.

Much as last Christmas, we’ll spend this Christmas at home. A happy holiday to all,

This entry was posted in Christmas letters. Bookmark the permalink.

Make Your Life Easier with the Top Rated Password Manager

Updates from the world of quiet ventilation

Explore the world of Fujifilm

A visual diary of life as it unfolds

An expert in Black and White Photography

...and Then There's Physics

Not a Jubilee Street Party

Climate Denial Crock of the Week

spreading the wisdom of pectin